Part of This Dream

After having written sichot and spoken on Yom Haatzmaut for the last two and a half decades, I find myself asking why is this Yom Haatzmaut different from any other Yom Haatzmaut? What new message can I offer this year that I have not articulated before?

The truth is that even if I had nothing new to say, even if I copied out everything that I have said before it would be enough – וכל המרבה לספר הרי זה משובח.

Every single moment of our lives here is a miracle. The week that began with Yom HaShoah and ends with Yom Haatzmaut emphatically underlines the wonder of our predicament, from the ashes of Maidanek to the Kotel Hamaaravi – we have lived to see the realization of the dream – we are not מבחינת היינו כחולמים, we are a living prophecy.

Around half a year ago, about a week and a half before Rosh Hashana, my dear friend Jeremy married off his son Asael. Towards the end of the chuppah Jeremy’s father came up to say the last Sheva Beracha, Jeremy’s father is a Holocaust survivor. At first he appeared a little confused, but he clearly was not. He may have forgotten which beracha he was meant to say, but in truth, he was more focused than anyone else present. He understood, truly understood – מלכות. He who had lost everything, he who had emerged from the depths of darkness, from Poland, to the greatest light of all –  מדינת ישראל ראשית צמיחת גאולתינו – He who had seen the doors of hell wide open beneath him, now stood at the gates of redemption, on the mountains of Judea, :עוד ישמע בערי יהודה ובחוצות ירושלים

We say that every Seder night, but all those present at the wedding, listening to that seventh Beracha and to the words preceding it – saw it with their own eyes. It was a moment of deep pride and meaning that will remain with me forever.

Jeremy’s father passed away just two months later, but we will always remember this wonderful man.

I didn’t have much time to recover, because within a week, we married off our eldest daughter Michal. Michal and her Chatan, Asaf, had asked me to officiate at their wedding, and the wedding took place in גוש עציון. Twenty-six years after marrying in חוצות ירושלים, I was now marrying off my daughter in ערי יהודה! Is it conceivable that a truly religious Jew can experience such wonder and not recite Hallel?! To actually live a verse in Tenach?!

It was understandable that we entered Rosh HaShana with great simcha, but it was only the beginning of this unique year.

I made Aliya on the 17th of Mar Cheshvan 5750 (15th November 1989), my younger sister Judy and her husband Robert joined me a few years later. I have now lived in Israel for twenty eight and a half years, but this year, as I said, is different and greater than any other.

The Shabbat before I made Aliya was particularly difficult, I had little to no family in Israel, many friends, but no close family; I was leaving a neighborhood that I grew up in and cherished, and I was leaving my childhood home. I looked for inspiration, and I didn’t need to look very far, it was Parshat Lech Lecha. I looked to אברהם אבינו; God commanded Avraham to leave his land, his neighborhood and his father’s house; to go to a place that he knew nothing about. Avraham immediately complied, and set the tone for generations to come.

I reasoned with myself: Do I consider myself to be a religious Jew? Yes. Do I consider the word of the Almighty God to be binding? Yes. If so, has He not told you what to do and where to go? And so, with a heavy heart but with the necessary ideological and religious motivation I came home. I got used to Israel, and England faded into the horizon; I am blessed with a beautiful family, and I live in a Yishuv that has taken the place of my childhood neighborhood; but family is family. For twenty-eight and a half years, my sister and I were separated from my parents – until this year.

In January of this year, my mother and father made Aliyah. Can you believe it?! Two wonderful people who have earned the right to their golden years; who have worked and given for all of their lives – decided to leave a culture which they were accustomed to, leave seven and a half decades of family history, and come to Israel – truly unbelievable. It is one thing to come to Israel in your early twenties, to face the challenges at the start of your life, but to do this in the golden years is simply amazing.

My parents have taught me so much in my lifetime, I could never have wished for greater parents. At some stage you think that they have taught you everything, but over the past four months I have watched my parents settle in Netanya, like a young married couple. Besides the inspiration of this unlimited courage, it fills me with joy to no end, that we are finally reunited as a family in Israel (we now wait patiently for my older sister and her family to join us when they feel the time is right). I keep repeating the words to myself, “my parents in Israel” – it is a dream come true.

So by now I am sure that you can see why for me this Yom Haatzmaut is different from all other years. But there is one final mention that, in truth, while I am writing has not yet happened, but all being well will happen tomorrow – בעזרת ה’.

Our eldest son Yitzchak, has been in the Army for almost two and a half years (he refused to do less than the normal amount required, and studied for two years in Yeshiva before being drafted). He has not been home for Leil HaSeder for three years, and this year spent Seder night on the border of Gaza; indeed like so many of our soldiers, he has spent the last month on the border, including last Shabbat.

The day before Yom HaZikaron, I found out that my son was due to be on Har Herzl on Yom HaZikaron. The custom in Israel is that serving ​soldiers stand by the graves of fallen soldiers on the day – it is a wonderful and moving gesture. And so I stood by his side, 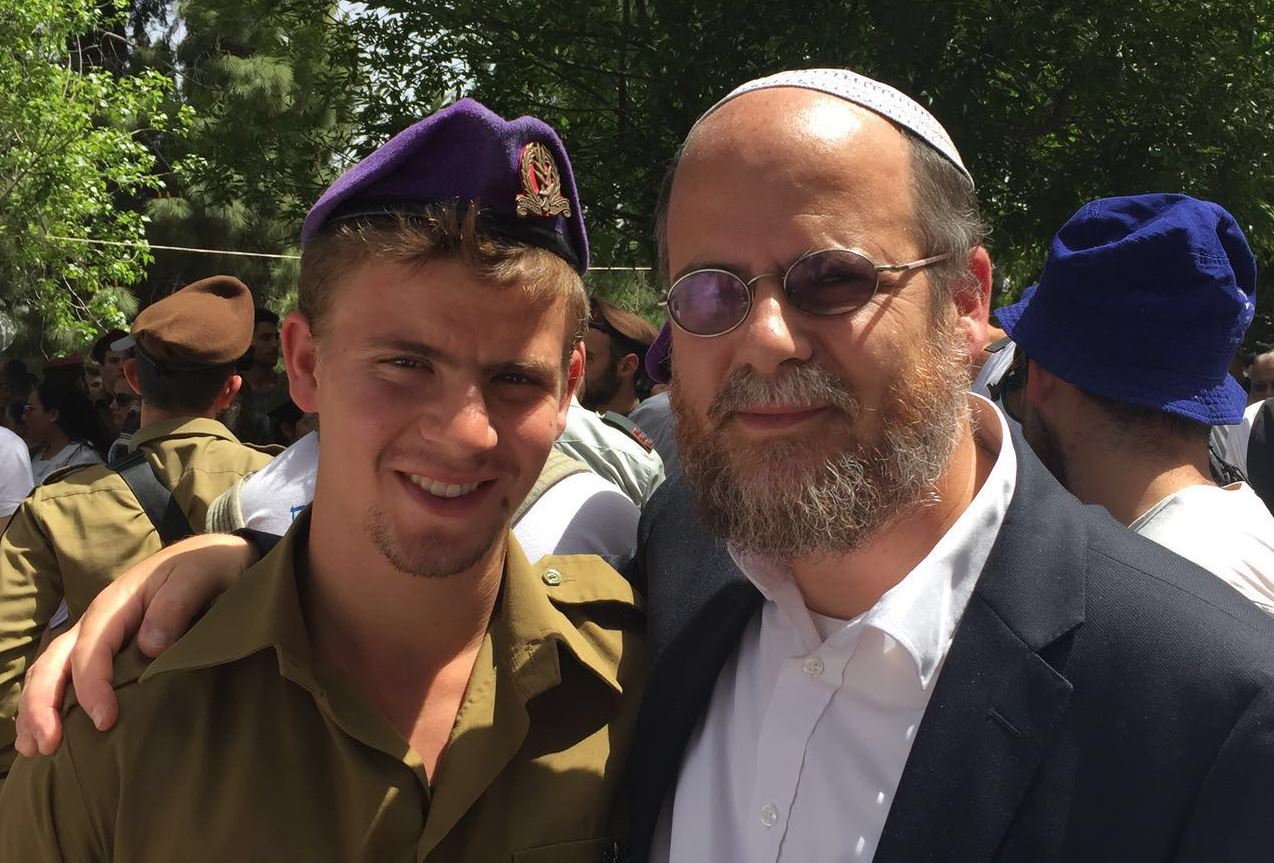 and beamed with pride at my Yitschaki, my Givaati son who is realizing our dream; I stood with my son who like so many others, is a living Maccabee; with my son, who like myself, does not view army service as a burden, but as an honor. After 2000 years of persecution, I intend to stand proudly with the soldiers of Israel, the living and the fallen. And, when the siren sounds at 11:00 am we will stand together – with Am Yisrael, acknowledging and appreciating what we have, with eternal gratitude to the Almighty God and to those heroes who made it possible.

I have spent three and a half decades studying Shoah, and when I stop to think about what I have, what we have today, I am convinced that not only should we recite Hallel on Yom Haatzmaut, we should probably recite it every day.

We are so lucky to have what we have, to be where we are, and to be a part of this dream. We still have much to do, and the problems both internal and external that confront us are challenging to say the least; but to a nation that has survived Holocaust, achieved Independence and regained Jerusalem, together we can surely make it to the finishing post.

I could never argue that our predicament is perfect, but I will argue that it is far better than it has been for two millennia. We have over 7 million Jews living in Israel, so please join me, my students, my parents and Am Yisrael in thanking the Almighty God for this most wonderful gift – מדינת ישראל ראשית צמיחת גאולתינו